I decided to attach another beautiful tabloid drawing, however absurd, scheme of assigning R1a1 to particular peoples-tribes living o Earth. 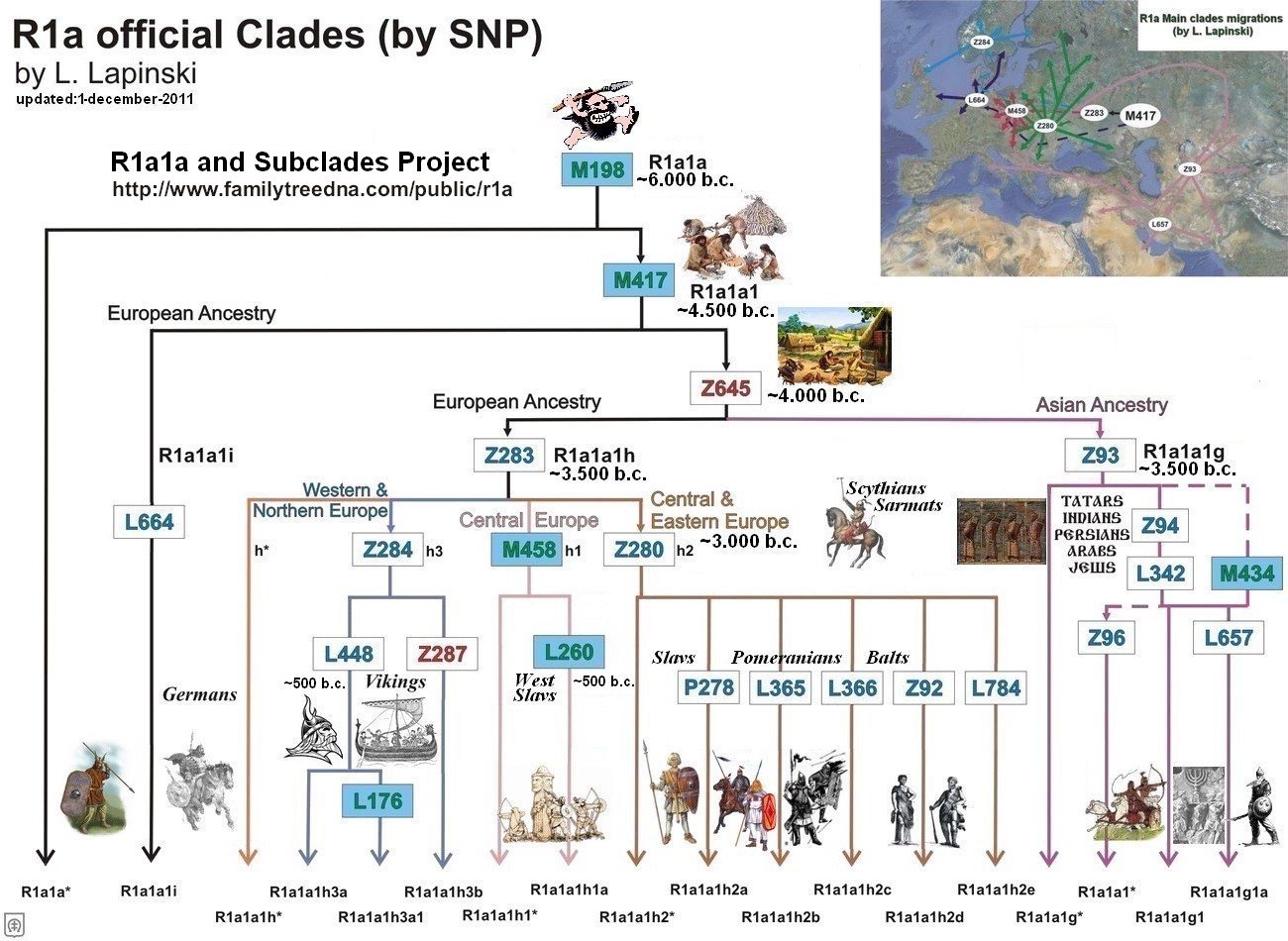 Because in today’s strange times some people claim that it is not enough to have a common father and mother in order to make up a family and saving Germans’ blood (whose blood partly runs also in my family’s veins – which I do not conceal – as there are numerous evidence of such mixing of the family Polish-Moravian-Slovak-Austrian-German-Armenian) make the schemes as above, I point out what such reasoning leads to.

The child of a particular father and particulare mother – is not their genetic family. Being his / her great grandfather’s great-grandchild you are not his family since too many generations separate you from him to be his family.

If we can not prove by any means that the R1a1 haplogroup was German because it was Slavic-Indo-Iranian, we are falling the genetic tree over (actually we are uprooting it and put it upside down) and then showing where R1a1 entering various civilisational contacts contributed to or participated in forming an ethnos, we can place Germanic nations and Scandinavians into R1a1 (who were formed by R1a1 with I1 i R1b. The final conclusion can be seen in the picture on the right – R1a1 formed not only Germanic nations, but also Tartars, Arabs and the Jewish. And, of course, it formed the Slavic nations and Persians, and Hindu people as well (what a pity that this inconvenient fact can not be blurred somehow or misshaped, but it can be marginalised).

The obvious truth got lost somewhere that the Jewish are of J1 and J2 haplogroups. After all, nowadays this fact is inconvenient for the proven thesis. We do not talk about the language community, either because it is an inconvenient topic. Neither do we talk about the cultural community – because it is inappropriate. It is of course the German noblemen that have Sarmatian signs and seals in their coats of arms because all of a sudden they are relatives of Scyths, whereas Slavs are not – such a thesis. Surely, it can not be Russian, Ukrainian and Polish mothers in Moscow, Kiev, Kraków, but German mothers in Berlin that tell their children bed time stories about the brave Rusłan-Rustam, Krakus-Cyrus, Kirus Kirkudanowicz, Kij-Kej and other brotherly Germanic-Iranian legends.

At last, we have the final conclusion here, black on white: Germanic nations and the Jews as R1a1 are the children of the common father and they have the purest ever, the most special Aryan blood. Aryan or Jewish? The Jews and Germans look so much alike, after all, black-haired, dark-eyed, aren’t they? Moreover, they speak the irreproachable Indoeuropean, archaic, common language, don’t they? The Slavs,on the other hand, are the nearest family of Tartars and Arabs – they also look as identical as Arabs and Tartars – they all have dark, almost an olive complexion, raven black curls and slanting eyes. Bravo!

Now we are looking forward to seeing the same – an uprooted tree in a beautiful drawing – scheme – which will show I1 i I2 – Old Europeans the fathers and mothers of Germanic nations and we are also waiting for another scheme with R1b1 that will show us Celts as the children of the same father as the Jewish and the Chinese. Bravo again.

There is no word about it – hush – that in Poland there are as many M458 as Z280. Well, are the Polish a Slavic nation or Scyths? do they speak Scythian or the Moon language? Does anybody have a dictionary of this ”Iranian” Scythian close at hand? Or do we create it basing on a few names twisted by the Greeks?

In addition, even if I were I1 and I2 and I speak Slavic and I inherited my Slavic ancestors’ spiritual and material culture, I am Slavic, and if I inherited the things after Scyths, I am a Scyth,and if I inherited both of them I say: Yes, it is our past – mine and yours – these are our roots so can I fell a full inheriter of these two peoples?! Or maybe I have no right to feel so because Z284′s father was R1a1 as well. Did he become anybody else because of his being in the north in the ice for a long time?!

Anyboy from the outside can call me as they wish but surely not German though also this blood runs in my veins – which I emphasise one more time. Germans have the right to feel Scyths as they have their descendants among them, the Polish do not have the right to feel so in spite of the fact that among all of R1a1 live 50% Z280. Germans also have numerous M458 among them, particularly east off the Elbe. Well, what will happen if they sudenly want to be Slavic in the way they want to be Scyths now? I dread to think.

In my opinion, there should be definitely more language and cultural community – coats of arms can be taken from the Polish noblemen and changed into German ones – then there will be Sarmatian and Scythian elements there and this way it will be closer!

Why not wear Sarmatian clothes as the Polish noblemen had been doing so till the times when the Polish Republic collapsed and it became fashionable to wear German clothes along with shaving a beard and moustache instead of shaving the head. Some legends and tales which would become common should be made up too. It would be really best, however, to  send the Slavic people somewhere on the orbitof Mercury, or to Pluto’s orbit, yes it would seem best of all – because the problem would disappear then and could be said all around that there were Pra Germanic people in Asia about 6000 BC.