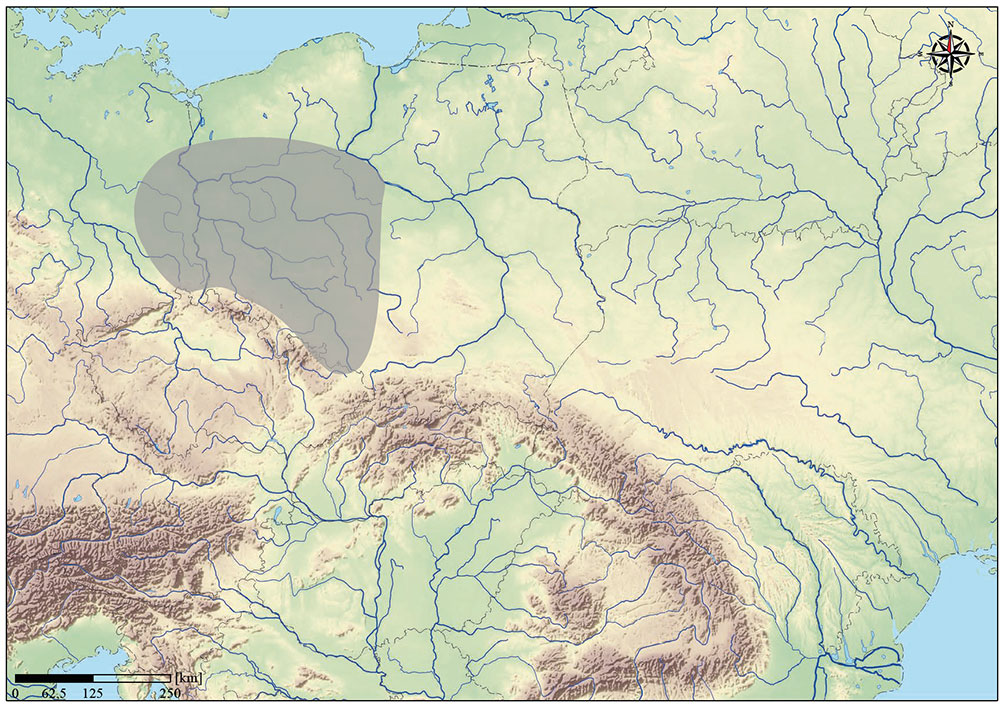 Some interesting excerpts from the introduction (emphasis mine):

In the 17th century BC the northern reaches of the Únětice culture oecumene experienced a structural crisis and a settlement hiatus; no such interruption in development occurred in the southern or western regions, or further west in the circle of the Blechkreiskulturen (Innerhofer 2000; Müller 2012, 257f.). In light of the most recent research, the decline of Únětice structures in the north was associated with a growing social and ecological crisis that resulted e.g., in the well-documented regression in the development of the fortified settlement in Bruszczewo in Greater Poland/Wielkopolska, which occurred ca. 1650/1600 BC (Kneisel 2012; Kneisel 2013, 101f.; Müller 2012). The settlement structure in that region only stabilized after several decades, with the emergence of Tumulus culture (Schurbein 2009; Cwaliński 2012, 16). In some parts of Central Europe (e.g., Bohemia, Bavaria, Hesse, Thuringia) a relatively gradual and smooth transition in the form of bronze items and pottery was observed between the periods of BA2 and BB1, diagnostic for the Early and Middle Bronze Age respectively (Rittershofer 1984; Innerhofer 2000). The term ‘pre-Tumulus’ horizon (BA3) was introduced to denote the stage that followed the disappearance of Early Bronze Age cultural structures and preceded the formation of Tumulus culture at the foothills of the Alps (Innerhofer 2000, 241f.)

The processes behind the development of this new cultural phenomenon may become clearer if one considers the origins of the new ideology of warriorhood apparent in the most progressive formations of the late stages of the early Bronze Age in the Carpathian Basin (Vandkilde 2007, 129; 2014; the beginnings of the Middle Bronze Age in Hungarian chronology; Hänsel 1968; Bóna 1992; Harding 2000, Fig. 1.3).This factor is particularly relevant in the case of the centralized communities of the Otomani-Füzesabony culture. Its members built impressive fortified settlements, knew advanced methods of bronze casting, and maintained a vast network of contacts that connected the north of Europe with the eastern reaches of the Mediterranean world (e.g., Bouzek 1985; Furmánek, Veliačik, Vladár 1991; Kristiansen, Larrson 2005; David 2007)
(…)
The composition of some spectacular hoards and the presence of military items in some of the graves associated with such communities may suggest that a new type of individualized elite (military aristocracy) emerged in this very culture (Kristiansen 1998, 376f.; 1999; Kristiansen, Larrson 2005). The attractive ideology would then have spread to the west and north-west and be adapted by the ‘post-Early-Bronze’, de-centralized and mobile communities (most likely based on kinship) of animal farmers inhabiting the upper Danube basin and the upper Rhine basin, as well as by the peoples of the Nordic regions (Vandkilde 2014, Fig. 5). This process went hand in hand with the dissemination of the custom of tumulus-building and the associated religious concepts, funerary practices, and territorial behaviour. The mechanism behind the adoption of this custom remains unknown. It may have been the result of imitating the barrows of Corded Ware culture, already present in the landscape of Central Europe – a similar process took place in the communities of the Trzciniec circle (Makarowicz 2009; 2010; 2011). It is also possible that the tumuli were based on the few existing Únětice barrows, though in this case the similarities are more apparent in the stone elements beneath the barrows’ mound. In both cases there was no direct contact between the earlier cultural formation and the emerging group.