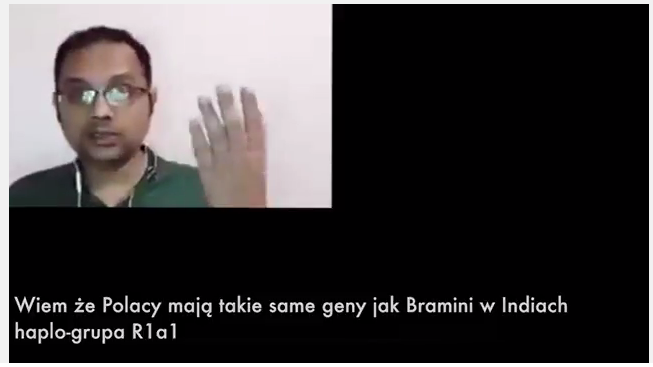 Indian origin of haplogroup R1a1
The paper does not appear to be live yet, so I cannot comment on the specifics. However, judging from the abstract I see no reason to agree with the authors’ conclusions. My most recent observations on the topic can be found in Origin of Hindu Brahmins. The authors’ observation of paragroup R1a* Y-chromosomes in India is in itself unremarkable, as such chromosomes have been found outside India, e.g., in North Iran, Crete, and Greek Macedonia (and I’m sure elsewhere). The argument about the presence of R1a1 in tribals does not carry force, as its presence there (at much lower frequencies than in Brahmin groups) can be explained as the result of occasional admixture.
We have received sensational results. In Russia lives only 66 million Slavs, and along with Ukraine and Belarus there are about 92 million. In all Western Europe live approximately 66 million Western Slavs (as in Russia). But in Asia itself they do not know that they are Slavs, i.e. 650 million people. It turned out that more than 810 million people in Eurasia have the R1a1 Haplogroup in Asia which means the second group in the world after the Chinese Haplogroup O (Han Chinese – 1137 million people – in 2010 ).

[The map is deceitful: Bulgaria where 12% of people with R1a1 live has not been marked and neither has Greece been marked with 16%, nor Turkey and Iraque (on average for 8%) – where on Kurds’ territory there are more than 20% of R1a1. Another, a much bigger range of R1a is in Iran and India. In Germany 16% has been marked whereas eastern and northern Germany make up 25-30% and Lusatia as even 63% of R1a1. This way of thinking presented here is not wholly correct, either because Slavs in the ethno-genetic sense, i.e. the language and historical ethnos + the store of genetic family co-creating the ethnos are in fact all the population of R1a1 in the world, and also all the population of Hg Y-DNA I (I2 + I1) as well as all representatives of other haplogroups in the Slavic countries who speak Slavic languages today (J, G, E, R1b etc.) It seems important to emphasise that the percentage data are dynamically changing along with the development of the research.]
Many major rival models of the origin of the Hindu caste system co-exist despite extensive studies, each with associated genetic evidences. One of the major factors that has still kept the origin of the Indian caste system obscure is the unresolved question of the origin of Y-haplogroup R1a1(*), at times associated with a male-mediated major genetic influx from Central Asia or Eurasia, which has contributed to the higher castes in India. Y-haplogroup R1a1(*) has a widespread distribution and high frequency across Eurasia, Central Asia and the Indian subcontinent, with scanty reports of its ancestral (R(*), R1(*) and R1a(*)) and derived lineages (R1a1a, R1a1b and R1a1c). To resolve these issues, we screened 621 Y-chromosomes (of Brahmins occupying the upper-most caste position and schedule castes/tribals occupying the lower-most positions) with 55 Y-chromosomal binary markers and seven Y-microsatellite markers and compiled an extensive dataset of 2809 Y-chromosomes (681 Brahmins, and 2128 tribals and schedule castes) for conclusions. A peculiar observation of the highest frequency (up to 72.22%) of Y-haplogroup R1a1(*) in Brahmins hinted at its presence as a founder lineage for this caste group. Further, observation of R1a1(*) in different tribal population groups, existence of Y-haplogroup R1a(*) in ancestors and extended phylogenetic analyses of the pooled dataset of 530 Indians, 224 Pakistanis and 276 Central Asians and Eurasians bearing the R1a1(*) haplogroup supported the autochthonous origin of R1a1 lineage in India and a tribal link to Indian Brahmins. However, it is important to discover novel Y-chromosomal binary marker(s) for a higher resolution of R1a1(*) and confirm the present conclusions.
Music: AKARI ARYACA
Sati Sauri- Modlitwa Słowiańska