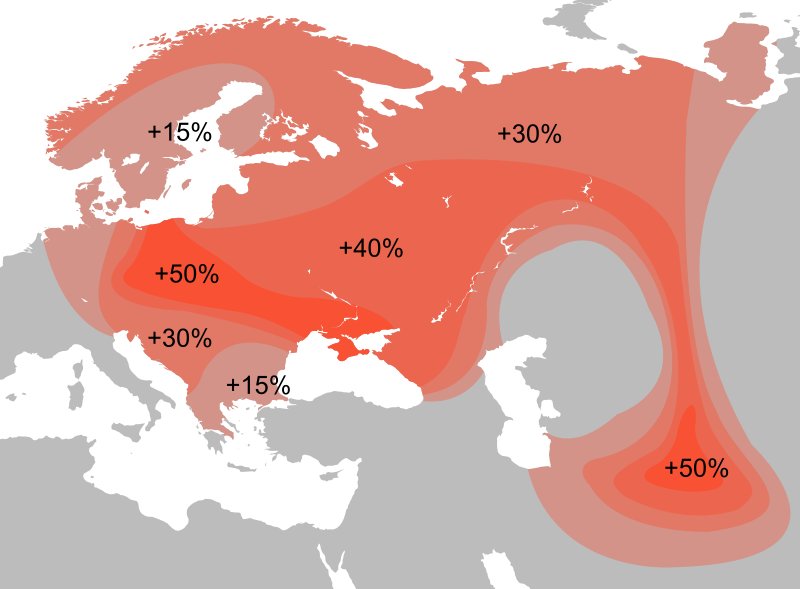 In the Balkans, although R1a was the minority, the Slavic language dominates and the Slavic-Old European-Celtic material culture with some admixtures of E and J, and sometimes with their big contribution – like in Greece prevail. The Greek language and Greek culture came into being from intermingling of E+I1+I2+J+R1b+R1a.

The Anglo-German language in the form as it is: kentum, 4 cases, common vocabulary, began to form when Scandinavians arrived in Europe once again and intermingled with people living here continuously – the mixtures of R1a+R1b+I2 about 500 BC (I1 + R1a-Z284 + Z280 + M458 + R1b1 European – are so called Germanic nations from Roman chronicles). As a result of the mixture of the languages on the continent the Anglo-Saxon language and culture begin to exist in Europe. The spiritual culture is shaped by the language ideas, spirituality coming from this language +material culture – dissimilar from the Slavic-Scythian – east off the Elbe – where the old archaic language still dominates as well as spirituality that is coming from it, even when material culture is taken over from the West – as it is happening today.

Are the Polish changing into Germans, the Japanese or Koreans because since 1990 they have been driving volgskwagens and toyotas, washing in Siemens washing machines, watching TV on Hitashi, Daewoo receivers, or even have been sewing on Singer sewing machines for 100 years? Are they communicating better owing to this material culture which is common in terms of the past?

I also give such an example: Two Indians of Q haplogroup – one lives in the capital city of Brasil Brasilia whereas the other dwells the forest not far from the capital city. The first one has moved from the forest to the capital and speaks Spanish today, has a TV set and drives a car (be it volkswagen or toyota), but he prays to his forest spirits and knows his Indian ancestors’ language. The latter, his brother Q from the forest bow shoots at monkeys and lives naked and barefooted in a stilt hut. Has the Q from the city of Brasilia stopped being an Indian genetically? No, he has not! But he has entered a new environment and a new ethnos begins to shape. The archeology which will dig out a volkswagen and toyota will not tell us what spiritual culture it was in the Brasilia of the Q who spoke Spanish – it will not even say to us how he spoke, or else he will leave behind the language record for the archelologists. How he spoke and what he thought will tell us: the contemporary language with traces of the past which is Spanish changed by Indian influences, with indian words an so on. Also beliefs, legends and stories will let us get to know what language he spoke and what he believed in.
Slavs believe in god = bhaga = bogactwo (bogactwo = richness, wealth) (which is common for Slavs, Iranians and Hindu people).

With reason Germans are today far from understanding Awesta and Wedy /w=v/ (Avesta and Vedas) without intricate translations and explanations of the meaning of words. Even Iranians have problems to understand Ghata (even the word ”ghata”) – the oldest written version of Avesta, written from the word of mouth. They do not comprehend the words directly as they sound but they have to guess their meaning. Slavic nations have kept the most archaic language the closest to the very very old common Slavic-Indo-Iranian language – the language of the mother and the father who were during the birth of the first on Earth mutated person Z280 4700+. That is why, with no need to translate I – a Slavic person – today understand a lot from the archaic ghata – Gadba – Gądba – Gędźba and simply putting it in the Polish highlanders’ language (in Polish highlander means góralski – harski) – ”gadka” (gadka = chat) – i.e. a story that is passed on, spoken by gadanie (gadanie = chatting) and which was written down as the beginning of Avesta (Awesta – Obwesta – Owiesta /w = v/ like wieszczyć (= to prophesy), wieszczba (= prophecy), wiedza (= knowledge) /pronounced: viedza/, wieda /vieda/, weda /veda/, wescyć ( = to tell, to prophesy) /veschyts/  (Westa /vesta/, westalka /vestalka/– wieszczka (a prophetess) /vyeshchka/) – wieszczyć /vyeshchyts/, wić-nić /vich-nych/ (wić = to thread, nić = thread, thin string), więźba /vyewʒba/ – splot (twist <noun>), also a twist of tangible matter (made of thread, hair in a plait but also immaterial like in royal news (news = wicie /vytsye/, wieści /vyeshtsy/) and orders sent by dukes – Poles-Sarmatians.

Therefore, I – a Slavic person – understand a lot from Scandinavian, German and English and I pronounce these words with no difficulties whereas I have never met a German who would be able to correctly pronounce my surname –  Białczyński, or Błaszczykowski – they prefer to call this footballer Kuba in Dortmund because they get their tongues twisted.

The Anglo-Saxon ethnos means the whole past and relationship to which its doubtless contribution even today have R1a1, Z280, Z 284, Z 93 i M 458 and which also shaped, along with others, the Polish and Russians.

Although Germans and Slavic people are separate ethnoses, they make up a community in a more general sense – that is why on my blog I post Tales (= Baje) as close and related to the pictures of Scandinavians – for example,Theodor Kittelsen or Bauer.

I AM an inheritor of Scyths and Sarmatians in the genetic, spiritual and material meaning – I, Czesław Białczyński, Yes! I am also an inheritor of other cultures which shaped the contemporary spiritual and material image of Poland. I am – me and my family – entangled in such genetic relationships as Polish-Austrian, Tartar, Scythian, Sarmatian, German, Russian, Lithuanian, Finnish, Romanian, Wallachian, Armenian, Czech, Moravian, Slovak, Hungarian, Greek, Turkish. I have all the historical heritage of all ancestors – also of Scyths and Sarmatians and Vikings and Turkish from over the Volga River and Bosphorus.