Only two types of script have been preserved till today: phonographic and ideographic. Europe uses alphabetical letters in which there is only one rule – „One phone – one character.” Many alphabets were created but nobody can omit this rule.

What are the rules for ideographic writing?

The work by Chuangliang Al Hung approximates a little the intricacies of Chinese writing.

„There are two main types of characters – pictograms and ideograms. When you look at the pictogram you can perceive a sketch or a picture of what it represents. Ideograms which represent a particular idea must be created for more abstract concepts.”

Basing on the ideogram of the word „rubbish”, the author indicates what rules apply for the creation and reading of characters.

The ideogram of the word – rubbish.
As wecan see, this includes many drawings which are recognisable even for the Polish reader.

1)As far as the ideogram is concerned, a drawing of one tree means a singular form. We have to repeat the sign in order to make a plural form. The word          forest is written with three trees. There is a drawing in the left hand corner in the considered ideogram and the drawing means the word – forest.

2)Figure 2 shows an outline of man astride with arms outspread, but without a head. A similar drawing dating from several thousand years ago that has been preserved in the flint mine and on a clay urn was found in Poland in a place called Biała near the city of  Łódź. Our little  people  have heads and even fingers. The word man was written with this sign.

3)The word woman, mother was written down by drawing a little person with arms arranged for holding a child.

5)On the right side of the sign denoting rubbish we can see the drawing of three flying birds. According to Chinese mythology, the human being’s spirit flies away as a bird. The drawings of these birds specify the condition of the little people lying by the forest.

The exact meaning of the sign is: „Many dead bodies are lying by the forest”.

All right. The sign made in this way is readable but where is the word rubbish here?

There is a rule for ideograms: You need to ask the questions you may have and look for the answers.

If many dead bodies are lying by the forest, what do you neeed to do with them?
-Of course, bury them and clean up the place.

If you clean up, what do you take away after the cleaning?

In this way the character was written and read, and on this occasion we found out many other ideograms which we can use now and make new ideas.
Mr Chuangliang says that the same sign can be used to mean, for example, a battlefield, or a disaster. The meaning of the whole ideogram is determined by other characters in the sentence.

That is not all.

Ideographic reading is not final and will vary depending on the mental and physical condition of the reader.

As it is apparent from this example, there are rules:

1)Individual little drawings must be recognisable.

2)Additional characters define already written ones and change the meaning of the ideogram. A new ideogram treated as the whole comes up.

3)To understand the  written ideogram we need to ask questions stemming from the read sign and make answers. That is: We need to think while reading. If we switch off our thinking, we will not be able to understand anything.

Equipped with Chinese knowledge, we will try to read the inscription on the urn found in Biała near Łódź and dating from many centuries ago. I assume it is made with ideographic writing. 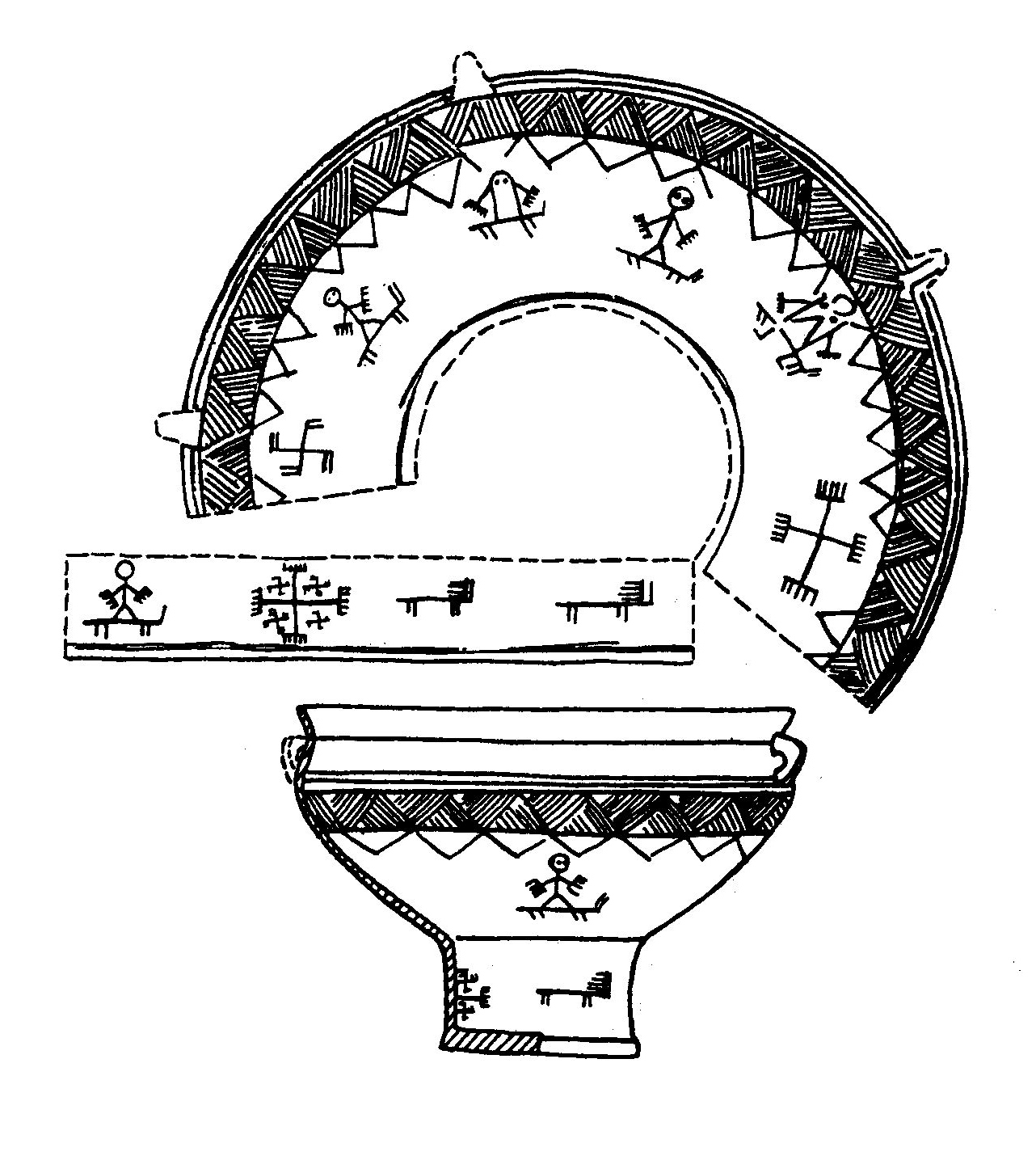 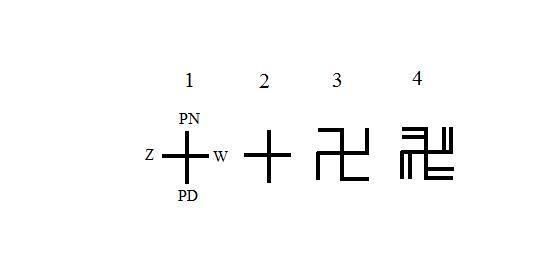 Using the Chinese techniques of the construction and reading of ideograms, we can write other words with this sign as well. When the sun is shining and it is a day and there is light so we can use this ideogram to write these words. If we compare it with the figure of man, we will write the following words: – „an enlightened man, a scholar.” Let’s proceed to read the next character.

Below No. 4, the second – the celestial body, i.e. the moon is written in terms of validity. We draw two lines at the ends of the arms of the isosceles cross. In this way, we have created an ideogram of the moon. Can you pay attention to the constructions of these signs? We have a record of the sky and numbered celestial bodies on it in order of importance.

By analogy to the previous ideogram we can write the words Night, Dark with that.
When we compare the ideogram of the sun and the moon, we read 1) The Sun and the Moon. 2) Day and Night.

As the day and night last for 24 hours each, we have an ideogram showing 24 hours as well as time.  In order to record an hour today, we apply mathematical rules and we divide the ideogram of 24 hours into 24.

In order to record a month into the ideogram of the moon, we add a digit and the one in the front of the ideogram indicates how many months we have recorded and the digit behind the ideogram signifies the next month, e.g. May. It seems to me that the record is readable. Now, let us read what items of content the record: ”Hands of God” conveys. 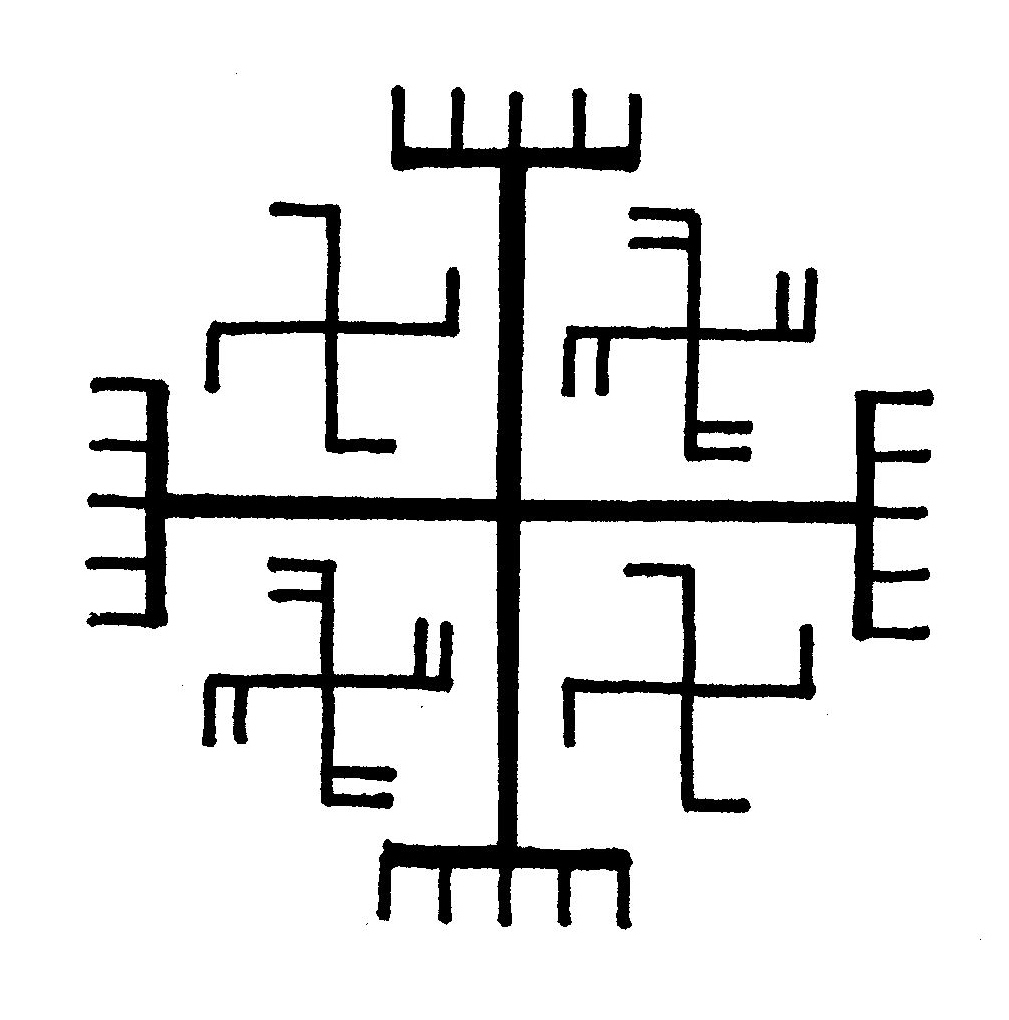 What can that mean?
1) The right of the universe and the right of the world, in other words the cyclical motion on the wheel which lasts forever. Additionally, the law of gravity is besought  in this movement. This movement applies not only to the universe, but it is also the rule of  the atoms that the matter is made of.
2) I would not be surprised if that was also the ideogram of God. Such a concept of God is deeply thought over. It is not slow-witted Yahweh with a long gray beard who is taught reason by wise rabbis.
I hope that my doubts will be dispelled by the record at the top surface of the vessel.
Let us try to read the inscription in the way it is drawn and then we will reach for the Chinese rules of comprehending the sign.

A young man on horseback falls out of the ideogram of the moon. He makes his way in time and changes into a spirit who also has his horse and his way to go. The next young man is born out of the spirit and after some time a spirit is born again. This whole procession is heading for the ideogram of the universe. The sign that I have recently talked about suggests that all of them be written into free places of the cross, the same as the signs of the sun and the moon on the ideogram above.

I have no doubts that this is the record of religious beliefs.
1) The man on the horse is a travelling man who has got a certain way of life to go. We can write a journey and a way with this mark.  In this case we have the record: The human being has a way to go from the moment of birth to death. Then, death comes, his / her spirit does not die but has its task to fulfill. The human’s spirit like a grain has life besought in itself. When the grain goes into the darkness of earth, it  lets the roots and a new life is born.

As we can see in the picture – the Spirit has fulfilled his life and has gone out of the ideogram of the moon, i.e. from the darkness, as a re-born human being. After man’s death, the spirit returns to the moon so as to give life to the next generation.

This is the record of Slavic faith, belief in reincarnation but without any political overtones, like in the faith of the Hindus.

This text has explained more than I expected and it confirms some Polish scientists’ remarks.

The Lord of the kingdom of Souls Nyja /pronounced: nyia/ derives his name from the word NYĆ – chudnąć (lose weight) in the same way as the moon does. The lower figure of the ”post” fished out of the Zbrucz River has three faces. One square is invisible, which suggests that Tryglaw is the deity of the moon – probably Nyj /pronounced: nyi/ from whom souls come out to give life to humans and gods. It is Him that does the hardest job and the whole world is on his head and he does the god’s task similar to people’s tasks who take on the hardest work and feed all the nation. It is people from whom those who are the highest have grown out.

(In English the Polish word ‚żyto’ is ‚rye’. In Polish, apart from the meaning of ‚rye’, ‚żyto’ also denotes an impersonal noun of the verb ‚żyć’ <‚to live’, to exist, to function>).